You are about to leave Pajunk.com. This link is provided strictly for information sharing purposes.
Pajunk GmbH assumes no responsibility for the quality, content, nature, or reliability of any linked site.

#WEAREPAJUNK
We are more than just a company.
Get to know us better, from a new angle.

‘‘Hi, my name is Bettina Pajunk-Wiedmann 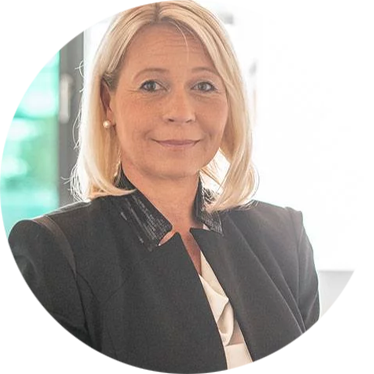 The Geisinger Arena is not only known to Baden-Württembergers. It is considered the Mecca of German inline skating.

Professional athletes from all over the world gather there and enjoy the perfect conditions of the track. Even Kaitlyn McGregor, Vera Güntert, Nadja Wenger and Ramona Härdi, the most successful Swiss women's team, train mainly during the summer months in Pajunk's home town. Their goal: the Winter Olympics which are currently taking place in Beijing. We are happy to be part of their success story and to accompany them as their sponsoring partner.

From speed to strength, endurance and quickness. Speed skating requires a high degree of tactical skill and a certain willingness to take risks. It is a sport about which we generally know and learn very little. So does the enjoyment of sport depend on whether it is popular? Or can athletes succeed in disciplines that have a shadowy existence?

If you take a look at the media presence of sports in Germany, you will quickly realise that almost everything in this country is, to exaggerate, a marginal sport. Except for football. This phenomenon can also be observed in our neighbouring countries. It hardly matters whether the sport is Olympic or not. Olympic disciplines are at least 'lucky' enough to be briefly in the public focus through TV broadcasts every four years.

Countless marginalised athletes pursue their passion every week in clubs, train hard, travel to competitions and maintain social contacts within their sport. We at Pajunk believe that even fringe sports should be given a chance in form of attention and financial support they deserve. This is how we got to know the likeable quartet of ladies from Switzerland. Their motivation and fighting spirit convinced us straight away.

Of course, we wanted to get to know these four better and learn everything about them and their sport, especially how young people get into speed skating. The personal stories have impressed us.

Except for Kaitlyn, all of them started with inline speed skating and then switched to speed skating (on ice). Nadja did this only three years ago. Kaitlyn's home, on the other hand, has always been the ice, although at that time she was equipped with a stick and a puck. As a member of the U18 women's national ice hockey team in Zurich, she noticed that the high speeds on the ice suited her even more and so she changed discipline.

Sadly, there are no professional skating or speed skating facilities in Switzerland. This is one of the main reasons why Germany, with its cities of Geisingen and Inzell, has become the second home of the Swiss women. The Geisingen location offers them the best training opportunities in summer, as the covered track in the arena ensures independence from weather.

Also, the landscape and surroundings are made for them. Due to the travel restrictions and contact limitations of the pandemic, they spent even more time in Germany and have met many people from Geisingen and all over the world.

For three years now, the young women have been training together almost every day. Their only rest day is on Sundays, when regeneration, relaxation and 'just living' are on the agenda. The team then likes to go out for dinner together or plan day trips to Munich or Salzburg. In general, they find it very important to maintain a balance with sport. That's why Vera and Nadja decided to study by distance learning, which challenges their minds.

Motivating each other every day a new for training and dealing with each other professionally even on bad days isn’t always that easy. But in the meantime, they know how to push each other or cheer each other up when things are not that easy for one or the other. Ups and downs are quite normal in sport and each of them also has their own strengths and weaknesses. The most important thing for them is to look after each other, support each other and thus grow together as a team.

Qualifying for the Olympics was anything but easy. Out of a total of 16 teams, only eight were able to qualify. With China as the host country, there were de facto only seven places left, some of which had already been given to the top favourites such as Russia, Canada and the Netherlands. The World Cups in December 2021 went extremely well: new record times and a lot of expertise.

Unfortunately, it was not enough for a team pursuit, but Nadja was able to get a starting place in the mass start category.

Many smiled at them for their training philosophy and their plans for the future, but in the meantime, they feel that the attention from outside is growing bit by bit: 'The nice thing is that there is no pressure on us yet. Nobody expects anything from us except ourselves. We are keeping our fingers crossed and are looking forward to exciting reporting from Beijing.'

On January 19, Nadja competed in the women's speed skating mass start and finished 10th in the semifinals.
Unfortunately, she did not qualify for the final. However, she can look back on a very good performance and is happy about this incredible time in Beijing.
We are proud to have supported these young talents on their way to the Olympics.

Receive the PAJUNK newsletter to stay up to date with our developments.